Today the Niagara set all of her sails.  Quite literally ALL of the sails, including a sail on the small boat cradled at the gunwhale.  Today was also the day that starboard watch had the opportunity to redeem itself from sportsball and shine at what they are best at: sailing.

Today’s competition was the pinrail chase, an age-old competition wherein the crew must correctly identify the line or thing that the boatswain calls out.  In the old days it was used as a training tool (as exemplified in the documentary “Around Cape Horn,” which is also very worthy of your time).  For the Niagara, it is a competition.  The first crewmember there gets the point for their team.  And with as little bias as possible, it is this blogger’s great pleasure to report that starboard watch nailed it. 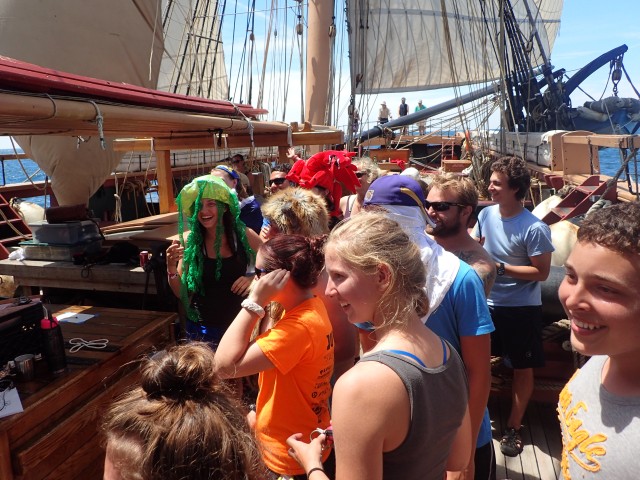 The score was tied up and time was running short (since the chase had been interrupted by a sudden swell in the wind and the need to strike all of that canvas that was set).  So a tie breaker was called: whichever watch could set and strike the main topmast staysail the fastest would win.  With amazing alacrity, starboard watch completed the task in one minute and eleven seconds, almost thirty seconds faster than port watch.  Redemption from sportsball, indeed.  And victory tasted so sweet: the winning team’s reward was ice cream at anchorage off of Presque Isle (which they graciously invited port watch to partake of as well). But not just ice cream, but ice cream with all of the toppings.  After all, sprinkles are for winners.

The crew settled down for their last night on board, their stomachs happy and the night air fresh on their faces.