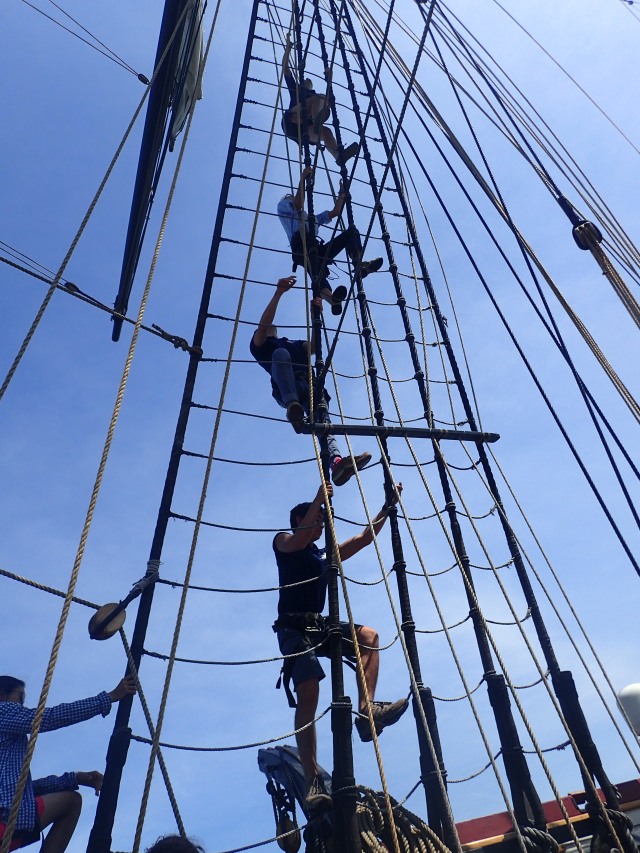 And thus the trip ended.  The crew weighed anchor and sailed off of the hook (again, one of the coolest and most uncommon things to do without engines) and took a short jaunt outside of Erie.  The wind was just right for a good sail, and the crew was loath to strike the canvas and pull in.  But come ashore they must, for every great adventure must have an ending so another can begin.  The ship was off loaded and the students’ families came from all around to come see their children’s newfound home and meet the crew.  Sadly, good-byes were made all around.

And I do mean sadly.  There is something so strong in the bond made between shipmates.  One of our trainees put it to me this way:  The best part of her trip was making 41 new friends, but not just friends.  She had a part in 42 lives, and had a part in the responsibility for their safety.  While the stars were amazing in the clear night sky, and the sunsets burned into memory, it was the people that they lived with for two weeks (in such tight quarters that camaraderie was almost demanded) that made the biggest impact.  They lived in a true community that time has forgotten how to acknowledge.

Henry Richard Dana had two years before the mast.  The Niagara trainees had two weeks, yet the lessons were learned, and the parting was such sweet sorrow.  Dana put it this way:

“A dozen men are shut up together in a little bark upon the wide, wide sea, and for months and months see no forms and hear no voices but their own, and one is taken suddenly from among them, and they miss him at every turn. It is like losing a limb. There are no new faces or new scenes to fill up the gap. There is always an empty berth in the forecastle, and one man wanting when the small night-watch is mustered. There is one less to take the wheel, and one less to lay out with you upon the yard. You miss his form, and the sound of his voice, for habit had made them almost necessary to you, and each of your senses feels the loss.”

Seafarers are part of the witchery of the sea. The adventure is unforgettable, and the things that are demanded of you and the realization that you are strong enough to do them is invaluable.  The high school students came onboard as trainees and left as calloused, tested and tried shipmates. They are going back to land more confident and part of a world that never forgets each other.

And they have one heck of a story to tell.